In early 2011 I broke up with Zoey and I was depressed and I thought I should start Dating in China yet again. It didn’t go well. A full year with one person, despite the trying and failing at improprieties, and I was a tad out of practice.

What did I really have in Shenzhen? Frankly, a bunch of shallow friendships and little job security. I liked my apartment and my general setup but I wasn’t tied down. If I wasn’t tied down, shouldn’t I take advantage and go somewhere new?

Many expats simply live out of their suitcases, but not me. The heaviest things I own are my books. I sell them, I give them away, but I always get new ones and I’m left with a big stack. That and my clothes and various knickknacks and toys, and it’s not as easy for to move to, say, Shanghai or Seoul or Bangkok as it is for that other kind of expat.

I made the decision to move to Guangzhou — also known as Canton — that third major city of China (a distant third, but third nonetheless). Why did I choose GZ? Several reasons. I liked the city. I planned to do more research of Guangdong Province for my writing projects. I even wanted to study Cantonese. Most of all, I wanted to get a van to pack up all my stuff and move somewhere only a few hours away because it’s easier.

I went there on a research trip and looked around and found a stable thing going, and I committed. Next there was the hassle of putting all my things in boxes, had a going-away bar-hopping party night with friends at the local lesbian bar, and 500 yuan later I moved. My Guangzhou year had begun.

END_OF_DOCUMENT_TOKEN_TO_BE_REPLACED

Dating in China or anywhere else in the world, breakups usually don’t just happen in one swift moment. It’s not like one second you’re in a relationship, and the next second you are officially single and you can use a stopwatch to catch the exact nanosecond. No, it’s a fuzzy math sorta thing. It softly fades, it backtracks and starts again. There is no specific point, it’s not digital it’ is analog. It’s a fractal.

Autumn, 2010. I had come back from America, while concurrently trying to convince a girl from my hometown to come follow me to Shenzhen, ready for a new apartment and a slightly new life. This time I had a smaller more city-ish apartment off Shennan Road (the central artery of the city), near a park and it suited me well. The fancy high-rises aren’t me.

Just one roommate, an American fellow with his own business. He was a bad drunk but a very good roommate. He had his own thing going on, and we’d hang out on occasion and leave each other alone when necessary. No roomie pressure. I worked more, made money. Started writing again, researched for a certain story, that ol’ dream postponed since coming here was starting up again and things were looking good.

Meanwhile, I needed to settle things with Zoey. I simply said we were in a rut. Then, after pressed for more, I was completely honest about the other girl in America. Oh, that vague situation that turned out to have no real meaning. She cried, my own heart was stretched thin, and feeling like shit and hating myself I then concluded that I was a bad person.

With Zoey, it wasn’t even the first time we’d broken up. Yet it was the most serious reason so far. Was it final yet? No. Numbed, we talked about it too much and acted on it too little, just ended up continuing the same things. We kept in touch, fell into bed a few times. I wasn’t sure what I wanted.

She wrote me a letter that tore me apart, and she told me “I’m not ready.” I thought and I thought, and some on-again-off-agains from time time, and I gave in. I decided we belonged together and it was time for me to do the right thing and stay with her. And stay with her I did.

END_OF_DOCUMENT_TOKEN_TO_BE_REPLACED 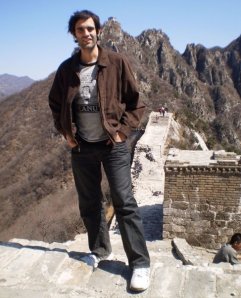 The dating in China officially begins.

After being situated in SZ, I was introduced to Mona through a coworker who was transparently playing the matchmaker. Mona was a 20-something independent office lady, an intelligent Hunanese (a common enough home-province for those in SZ) who studied in Beijing and came to Shenzhen to work and live near Hong Kong. She was good-looking, with long, permed hair and a nice figure and she liked to wear purple and green contact lenses. She liked Japanese pop culture and Marilyn Manson. Her English was good – which is kind of a requirement for me. I won’t date someone for language lessons with whom I can’t have a meaningful conversation. Which is one reason my Mandarin isn’t that good.

One day said coworker invited us both to a restaurant and then suddenly cancelled. We were left alone to get to know each other better. Obviously being set up, right? We ate and went to my apartment complex to talk about movies and anime and then we sat on a bench outside and made out among the soft evening winds. It escalated and we became a couple for four or five months and I started introducing her to others as my girlfriend.

Mona had a small apartment nearby; I’d often prefer going to her place to enjoy our time together and stay the night. She had a cute small dog, the poor thing cramped in a tiny apartment. We’d go on long walks with the dog, in parks and gardens and “mountain climbing” as the Chinese call hiking. I’d be the dog-sitter when she would go out of town. 2009 rang in and we celebrated the New Year at the stroke of midnight with a kiss.

There were some flaws in all this, some cultural and personality differences. Not all rainbows. But no big deals to get over. Most important of all, we had similar interests and she was nice and hot and she liked me. Though I did feel corny when she first held my hand at Dongmen, and I’ve since gotten used to how in China public displays of affection are a bit less public except for the ubiquitous hand-holding. It’s like primary school dating or something. Aw who am I to try to be so mature?

Occasionally I invited her to go to pubs with my friends, and she never seemed comfortable in that scene. Was it a mistake? Was I the one moving things fast, too much pressure? Is that something I do? When it was just the two of us we were fine. Usually we’d go out for dinner and stay in at her place on the weekends and watch bootleg DVDs. Celebrated my birthday like that. Other times she showed me around Shenzhen. I recall a great outing to Hong Kong, shopping and bookstores at malls and taking pictures at the Peak. Then, dangerously, we planned a trip to Beijing.