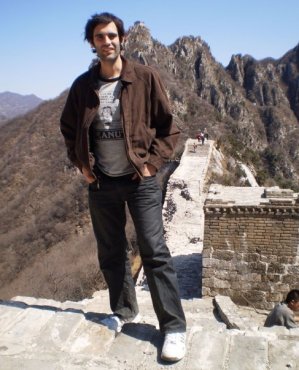 The dating in China officially begins.

After being situated in SZ, I was introduced to Mona through a coworker who was transparently playing the matchmaker. Mona was a 20-something independent office lady, an intelligent Hunanese (a common enough home-province for those in SZ) who studied in Beijing and came to Shenzhen to work and live near Hong Kong. She was good-looking, with long, permed hair and a nice figure and she liked to wear purple and green contact lenses. She liked Japanese pop culture and Marilyn Manson. Her English was good – which is kind of a requirement for me. I won’t date someone for language lessons with whom I can’t have a meaningful conversation. Which is one reason my Mandarin isn’t that good.

One day said coworker invited us both to a restaurant and then suddenly cancelled. We were left alone to get to know each other better. Obviously being set up, right? We ate and went to my apartment complex to talk about movies and anime and then we sat on a bench outside and made out among the soft evening winds. It escalated and we became a couple for four or five months and I started introducing her to others as my girlfriend.

Mona had a small apartment nearby; I’d often prefer going to her place to enjoy our time together and stay the night. She had a cute small dog, the poor thing cramped in a tiny apartment. We’d go on long walks with the dog, in parks and gardens and “mountain climbing” as the Chinese call hiking. I’d be the dog-sitter when she would go out of town. 2009 rang in and we celebrated the New Year at the stroke of midnight with a kiss.

There were some flaws in all this, some cultural and personality differences. Not all rainbows. But no big deals to get over. Most important of all, we had similar interests and she was nice and hot and she liked me. Though I did feel corny when she first held my hand at Dongmen, and I’ve since gotten used to how in China public displays of affection are a bit less public except for the ubiquitous hand-holding. It’s like primary school dating or something. Aw who am I to try to be so mature?

Occasionally I invited her to go to pubs with my friends, and she never seemed comfortable in that scene. Was it a mistake? Was I the one moving things fast, too much pressure? Is that something I do? When it was just the two of us we were fine. Usually we’d go out for dinner and stay in at her place on the weekends and watch bootleg DVDs. Celebrated my birthday like that. Other times she showed me around Shenzhen. I recall a great outing to Hong Kong, shopping and bookstores at malls and taking pictures at the Peak. Then, dangerously, we planned a trip to Beijing.

My first major travel within China, and I was excited to go and see the most obvious sights: Beautiful mountainous paths along the Great Wall, getting lost in the huge complex of Forbidden City, not protesting at Tiananmen Square. Learned more about the hip mod Beijing scene as well, saw live music by the water, went to a gay club in the party strip, and I particularly enjoyed works of groundbreaking creativity at 798 Art District.

Well, travel can be a dangerous thing. Those are often relationship killers, as Seinfeld once said and I believe Annie Hall portrayed as well.  “Dead shark”-wise. When you’re stuck on an airplane together, cramped in a hotel room, exhausted after sightseeing. 24/7 shared space until you get sick of each other. She did go meet her old college friends and left me to travel alone plenty, but by the end we had some troubles.

I had a great time on this trip, I still remember Beijing fondly. Been a long time and I’d like to visit again, though hopefully when the pollution somehow gets more manageable. I haven’t been back since, mostly because China–and Asia–offers way too many travel opportunities and I don’t want to repeat myself just yet. I’m still waiting for someone to visit me and demand to see the Great Wall, maybe I’ll even take the new express train instead of grueling flying. Won’t you read this and inspire me to return to Peking already?

Sure enough, when we got back Mona and I soon had some petty fights and then she started ignoring me. I had a K experience at a beach party–for which I thank the local pet tranquilizer factories for the steady supply around here– and reflected upon my anxiety. When I confronted her over our problems, we had a very uncomfortable conversation and then officially broke up.

“I don’t like being taken to some place when I don’t want to go.”

Understandable, it’s not a good feeling to be dragged around.

I only wanted to include you in my life, sorry.

“We should just be great friends.”

She didn’t really want to be friends. I think back on it and I’m pretty sure I didn’t do anything wrong. I could be mistaken, I have my own biased point-of-view to be sure, but it does seem to me she just wanted to have some brief fun with a foreigner and the whole thing was never meant to be serious. I satisfied her for a while in that one way y’know and then it got boring.

I had experienced all sorts of rejection and breakups at various times in my life up to that point, some worse than others and some with me indeed as the ‘bad guy.’ But this was one of the the first times I had the issue of being in a relationship and wanting to continue that relationship, yet the girl didn’t want anything long-term. Not a nice feeling. It’s not as if I specifically did anything disrespectful and was dumped accordingly, basically I just wanted something deeper and she wanted something shallower. It happens.

I’m still not used to it when that happens.

In the end, this is my interpretation. That’s all I’ve got, all I’ve learned.

I was still young. I bounced back, consoled by my friends and ready to move on to new experiences.

And new experiences I had.

To be continued: Julia

6 thoughts on “Dating in China – Mona”