Previous: 2007 to 2008 How Burning Man and psychedelics led me to China

2009 and 2010, the beginnings of a new decade, as I become acclimated to life in Shenzhen/Hong Kong and have fun traveling in Southeast Asia (and America), and family stuff… plus I start dating somewhat regularly. Crazy, right? 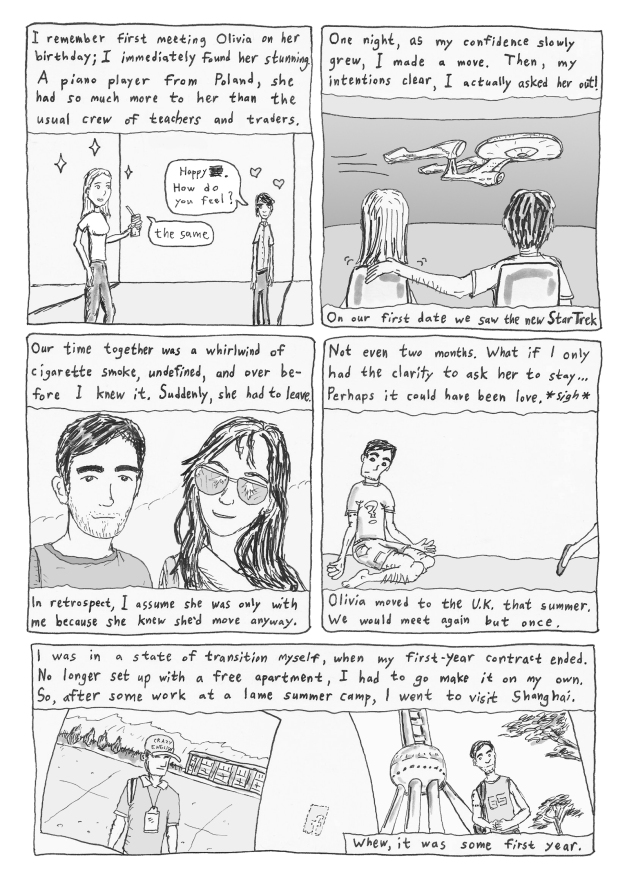 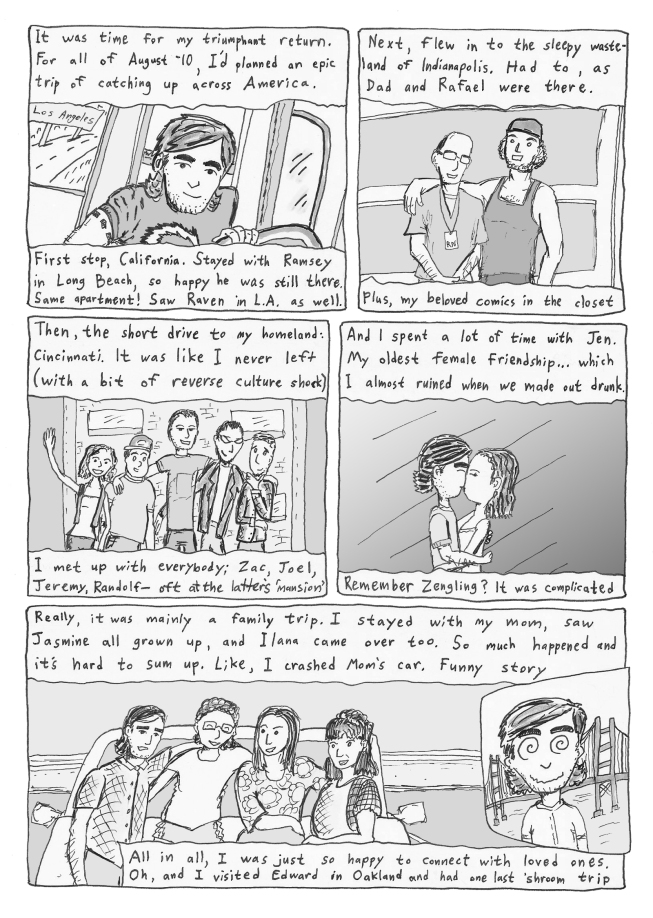 Interview with the amazingly well-traveled Darcy Shillingford, Canadian novelist and blogger for the travel site travelingspaceopera.com 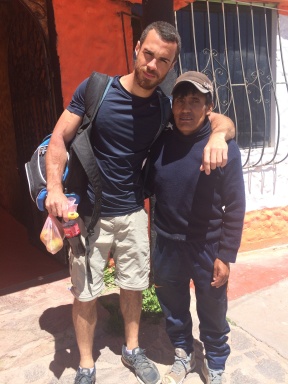 Pic info: “just as I was about to hop on a bus, leaving Cabanaconde to head to Arequipa, then eventually Cuzco. Caesar, who I’m pictured with, was our host in Cabanaconde.”

It varies depending on the kind of writing I’m doing. With my travel blog posts, I try to put myself in a relaxed, informal state of mind. I give myself freedom to let my stream of consciousness flow, while trying to maintain some kind of structure and thematic consistency. Imagery is important to me, and despite the fact that I can throw in as many pictures as I want, my goal is for my writing to be able to evoke colourful detail with or without them. I want the reader to feel like they’re walking alongside with me.

As far as fiction goes, I can’t force creativity. I can sit there looking at a blank page or computer screen for a long time and nothing comes to mind. Other times, I’ve been lying in bed at two in the morning and suddenly think of an idea concept that I have to write down and develop a little bit before I can go to sleep. When I’m on a role, though, I try to let it snowball and see how far I can take it. The only fiction I’ve put a lot of effort into is in the sci-fi genre, and I try to write what I would want to read if I were to pick it up myself.

How do you compare travel writing with fiction writing?

For me, fiction writing has been far more time consuming. In addition to creating a plot, out-of-this-world (literally) settings, characters, and so forth, there is a great deal of research involved due to the genre choice. I’m no scientist, but I do take advantage of the relatively unlimited academic resources at my disposal and have put in countless hours researching elements of astrophysics, the gathering and employment of military intelligence, planetary and solar physics, religious and political history at a global level, various elements of the social sciences, philosophy, and so forth.

What gives you inspiration for fiction?

It depends on what aspect. I get inspiration for characters from my daily interactions with all kinds of people. I work at a restaurant and meet dozens of people a day. Also, the people I’ve met traveling are so varied and interesting that I can’t help but be inspired by them. When it comes to plot, I’m inspired by my education, particularly in the realm of history and politics. I like grand, I like big, I like epic, but I also like obscure. Random bits of military or colonial history that were glossed over in school, or missed altogether, fascinate me.

What are your favorite books?

Use of Weapons and Feersum Enjinn, both by the late Scottish author Iain M. Banks are certainly in my top five. I also appreciate classic or golden-era sci-fi, but I also think some of the classics haven’t aged well, particularly in regards to their social commentary. I also grew up loving the Harry Potter series. Stephen King is awesome as well; very psychologically immersive and vivid.

Why did you choose to spend your time in 2013 traveling in Southeast Asia?

I simply had to. I was at a point in my life where I’d recently graduated from university and didn’t quite know what I wanted to do with my life. My girlfriend and I had done some all-inclusives, but had also discussed doing some “real” travel. What began as an idea for a month or two in South America turned into half a year in Southeast Asia. When I look at a picture of the two of us at a wedding a couple days before we left for this trip, I get jealous of that guy. He has the best adventure of life just on the horizon.

Is it difficult to write about your experiences going back two years? Did you keep journals at the time or anything like that to help you to write about it now?

I did keep journals, but I rarely need to refer to them. I usually only look at them to remember the name of a person I met along the way. Having taken a couple thousand pictures makes it fairly easy to track everything we did, but every so often, a detail or nuance will creep into my memory that I hadn’t thought of since it happened.

You most recently traveled in South America, correct? What cultural differences have you come across that contrast with the Southeast Asian experience?

I actually wrapped up the Peru trip in mid-April. We were there for 18 days. The first thing I took into account were the similarities with Asia: the scorching heat, the abundance of cheap stall food, the hokey tourist areas where local merchants spout silly lines to travelers in order to charm them into overpaying for whatever product or service. All great stuff, in my opinion. The thing with Southeast Asia is that I visited seven countries so there are dozens of differences even between those countries. I found, though, that the food in Peru is a lot heavier and starchier. Also, the weather was far more erratic, perhaps because we spent much of the journey either in the Andes or the Amazon Jungle.

Which country or countries (Southeast Asian and/or South American) gives you the most inspiration?

Vietnam may have been the most inspiring, but as I’ve written in the past, I have a heavy bias. My girlfriend, Teresa, was born in Canada but her parents are from Vietnam and she speaks, reads, and writes it fluently. This had a vast impact on our experience there when it came to interacting with the locals and we really got to know people there more than anywhere else we’ve ever traveled. Also, Vietnam has a great deal of variety (accents, landscapes, cuisine) and its geographical makeup made it really easy to travel in a fairly straight line without missing too much along the way.

Do you prefer the bustle of developing cities or the splendor of natural, untouched-by-man places? END_OF_DOCUMENT_TOKEN_TO_BE_REPLACED 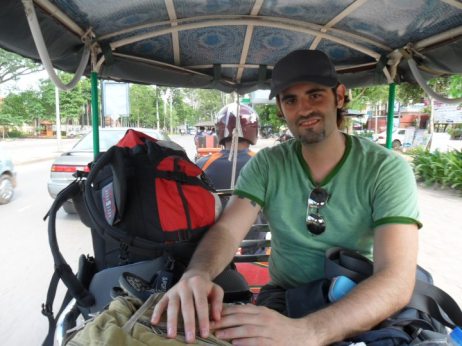 Dating in China etc. sometimes expands to surrounding countries, and a common country to visit is Thailand. It’s nearby, it’s cheap flying, and it’s beautiful. Even easy for Chinese friends to get a visa. One day back in the mid of 2011. I decided to take a girl to Thailand. And what a mistake that was…

I don’t like to live a life of regrets. I try to interpret all positively, believe it or not. I do my thing, I have experiences, I learn. It’s not like I’ve burned that many bridges, it’s not like I do that bad. Yet there are certain things that have happened to me, certain people that were a complete waste of time, and I’ll feel regret. This is one of those.

I met Cynthia at a club in Shenzhen. One of the few times I successfully picked up a club girl. Although I had recently moved to Guangzhou, I was going to Shenzhen often, and we had fun together when I was in town. Not like I was tied down to anyone else. The relative distance prevented us from growing too close, and fun was all it was. Even that didn’t last long.

After crazed inebriated night in Shenzhen, I slept at her place and discussed my plans to vacation soon. Free time was approaching and I decided on a quick trip to somewhere Southeast Asia. With so many countries to choose from we narrowed it down; she had never been to Thailand before, and we searched prices together on Air Asia and suddenly tickets were booked.

I’ve written before about the challenges in traveling with a girl, but this thing was dead before it even began. When we later met at the Guangzhou airport, she didn’t even want to talk to me. She hadn’t kept in touch much in the intervening time, and I couldn’t believe how cold she was. It was hard to read. Was she mad at me? Did I do something wrong? She probably just had other guys by then. We weren’t serious or anything. No real relationship whatsoever. Perhaps she regretted committing to this trip with me. In all fairness, it was extremely stupid to make travel plans with a fuckbuddy I barely knew. I just get way ahead of myself at times, what can I say.

Or, I don’t know, like maybe she expected me to be a rich foreigner and take her to five-star hotels and pay for everything, have that sort of glamorous travel. I specifically told her that I want to have a backpacking-style travel experience at youth hostels and I don’t have infinite money. We discussed it at length, really. I mean, we were never boyfriend and girlfriend. I paid for a lot, taxi rides and a few meals, but I didn’t pay for everything. What exactly was expected of me?

I didn’t handle it well. The first night we went to Bangkok, I booked a guestroom and went to sleep and we didn’t touch each other. The next day there was a bad energy in the air; we went sight-seeing and forcibly took pictures (never together) and traveled by boat, temples and malls and so on. Eventually, she preferred to hang out with frat boy types from the youth hostel. They went to see the infamous sex shows and all that.

“Let’s go our separate ways,” I said. “No hard feelings.”