Allow me to take a moment to express my fondness for the works of Jim Starlin.

Since Guardians of the Galaxy – and yes the Avengers – has become mainstream, everybody knows Drax the Destroyer and Gamora and the Infinity Gems/Stones.

Most of all, now everyone knows Thanos. 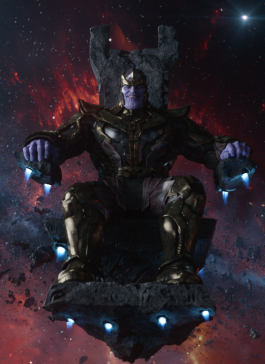 But for it goes way back. When I was a precocious teen in the 90s, I couldn’t help but fall for the Infinity Gauntlet crossover. It was so epic, so cool. Thanos the all-powerful against a horde of superheroes and space beings. Followed by the exponentially-less cool Infinity War and Infinity Crusade, it was the epitome of overblown early 90s comicbook crossovers. What better to be introduced to the grand Marvel Universe?

The real story of Jim Starlin goes back much further that that. The cosmic escapades I am describing explore one of the great long-form stories of our time, with about forty years of history.

In the 1970s Marvel Comics was on top, having surpassed DC in the previous decade’s Silver Age quality. The medium was full of wonder, although it did get ridiculous as much as it got experimental. The Defenders, Howard the Duck, Jack Kirby’s Captain America. Comics hadn’t exactly grown up by then, no Claremont X-Men yet, but there was much fun to be had in the disco era.

Jim Starlin first got his break in 1972. He wrote and drew three issues of Iron Man, in which the metallic hero fought the Blood Brother aliens. And suddenly it was revealed they were working for the master villain of all time: Thanos.

The cosmic saga had begun. 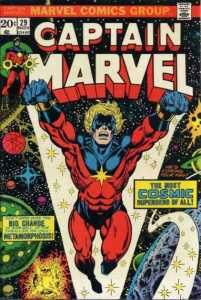 It was in the pages of Captain Marvel that the saga truly unfolded. Starting with issue 25, the eponymous Marvel character finally found his own voice. The Kree alien (actually named “Mar-Vell”) was joined by the cosmic being Eon to become a protector of the universe, and was faced off against Thanos powered by a cosmic cube. The universe was just barely saved in the end.

I came across the trade paperback collection in my youth and I’m glad I did. The Infinity crossovers of the 90s made more sense with the backstory. That was the beauty of being into superheroes, to go back and endlessly collect and learn the whole story… Baroquean really…

There was also Tbe Death of Captain Marvel, the first official graphic novel of Marvel. A sort of proto-crossover, it was simply about the Captain getting cancer and retiring from the world of the living. In typical fashion, Starlin explored themes of the afterlife and the psychedelic depiction thereof.

That was back when characters stayed dead. 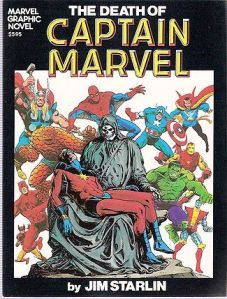 Starlin is known just as well for Adam Warlock, a random character created by Kirby, who later became a sort of Christ-like figure. The artificial humanoid died and resurrected himself a number of times, just as often to fight against Thanos as he did ally with the mad Titan. An unlikely antihero.

The original build up of the Infinity Gems in comics was harder for me to find. I tracked down some rare reprints, an unsuccessful miniseries from the mid-90s. Weird stuff. Another villain was the Magus, who was Adam Warlock from the future and had started his own evil religion. Warlock had to erase the timeline to win. I think we can all relate to these kinds of psychological adventures. 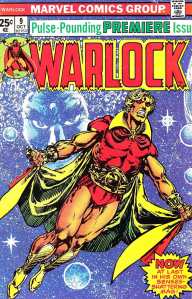 It was a grand cosmic mythology, on par with Kirby’s Fourth World. The universe was a place of alien empires, tyrants with omnipotent power, and strange abstract beings overseeing the functions of all reality.

By the way, speaking of Kirby, Jim Starlin explained in interviews that Thanos wasn’t based on Darkseid — DC’s megavillain of similar stature — but rather  more based on Metron originally. What with the floating chair.

Starlin is mainly well-known for the space operas, but he also had a diverse career. Even wrote Batman in the 1980s during the Death in the Family arc with poor dead Robin II. Cosmic Odyssey for DC as well, and his own creation Dreadstar. In later years, Rann-Thanagar War comes to mind.

But Starlin’s greatness is really showcased with the cosmic stuff.

In 1989 he wrote Silver Surfer (no longer illustrating) in a prelude to the Infinity Gauntlet. The anthropomorphic nature of Death had brought Thanos back from the grave, to harness his power and bring an evil balance the universe.

Much has been written of the ‘Infinity Wars’, the return of Adam Warlock and his multiple personas. It was Marvel of the 90s okay, and it was great. The followup series Infinity Watch wasn’t that great but it did further expand the mythos, as Warlock led his own ragtag team. Pip the Troll and Moondragon may not be top-tier franchises, but Drax and Gamora certainly grew in popularity in that series. And look that them today, full-fledged movie stars!

In the early 2000s (see above), I got back into Marvel. And just in time. Jim Starlin wrote and even drew Infinity Abyss, and all that I loved was back.

Followed by Marvel: the End (reprinted as Thanos: The End) 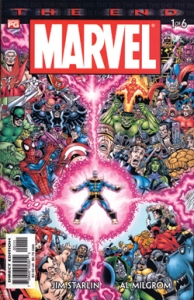 Forget about Thanos being used as a villain anywhere else, only Starlin does him justice.

These days, I’m currently enjoyed the multiple-realitied ambitiousness of the novel Infinity Revelation. There was a miniseries Hulk vs. Thanos in the middle there.

And I anxiously await the latest graphic novel Infinity Relativity. (do you sense a pattern in the titles?)

Next: I realize that in all these author profiles I’ve left out one last highly important writer — one British misanthrope with a prolific body of work.

Next up none other than the maginficent Warren Ellis