He’s British, smart, and touches on occulty themes, and yet he was not part of the original 90s “British Invasion” of comics writers such as Alan Moore, Neil Gaiman, and Grant Morrison.

His work is violent, intelligent, sometimes dark, with a wicked sense of humor.

In my youth I read some of his Marvel work, like Thor and British X-spinoff Excalibur. I had mixed feelings, because it was that kind of “grim and gritty” style of postmodern comics. Ellis, similar to another (Irish) writer Garth Ennis, clearly hates the superhero genre. He has no use for it, other than a method of making a living sellilng comic scripts. In a perfect world these authors could do other genres without having to slum it among the capes. So they write heroes, all the while cynical and despising what heroism stands for. Still, makes for interesting stories at times.

Warren Ellis is a much sought-after writer for both DC and Marvel, but he rarely does mainstream work anymore. And that’s good.

I became a real fan of the Wildstorm era. Wildstorm, if you recall, was Jim Lee’s company within Image Comics, after all the big name stars left Marvel in the early 90s. Those early comics more than often shit, but Lee ended up with more staying power than, say, Rob Liefeld.

One of those Wildstorm books happened to be Stormwatch, which wasn’t anything great. Seemed another overblown X-Men rippoff about a government team or something. Warren Ellis came upon the title with little fanfair, and it soon gained critical acclaim. No one saw that coming.

I missed it the first time around, but around the mid-2000s I was ruffing it in Los Angeles and enjoyed going to a downtown library. They had an extensive graphic novel collection. I had little money and lots of free time. So I decided to catch up and see what I’d been missing. 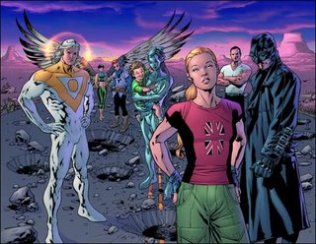 Stormwatch was cool, but eventually all the characters were killed off and something new came along: Authority. That’s what it was truly all about.

Authorty, illustrated by Bryan Hitch (of Ultimates fame) was one of the first “widescreen” comics. Every issue was epic. It starred Apollo and Midnighter — a gay version of Superman and Batman, and Jenny Sparks the spirit of the Twentieth Century. Unapologetic in its epicness, they fought gods and aliens and were always high-level high-concept.

Moreover, Warren Ellis’s greatest legacy would be Transmetropolitan. Those graphic novels I ever so cherished, as they kept me going during my starving artist years…

Published by Vertigo, and that’s more like it. Actually was originally published by DC’s “Helix” imprint, but that went under and only Transmetro remained to become one of Vertigo’s most successful.

The story of gonzo journalist Spider Jerusalem in that Hunter S. Thompson vein, but in an unidentified bizarre sci-fi future. There were crazies with alien DNA, a Nixonian character affectionately referred to as “the Beast”, and an even worse President called the “Smiler.”

Each issue punched you in the face and laughed loudly while doing that. Anarchy and journalistic integrity and weird post-science concepts. At 60 issues, by far a record for Ellis. Well done, sir.

In the 2000s Ellis continued with some Marvel projects in the midst of the more mature Quesada era. These weren’t quite rated R books from Image or Vertigo, but better than anything else out.

Nextwave Agents of H.A.T.E. was a cult hit, full of B-list characters like Machine Man and Boom Boom fighting against the Beyond corporation’s ‘Unusual Weapons of Mass Destruction.’ H.A.T.E. being a hilariously biting satire of S.H.I.E.L.D. The whole comic was full of pithy one-liners, nothing else like it from Marvel. First arc was about the dragon Fin Fang Foom and had many comments about purple underpants and lack of genitals. Only lasted 12 issues, which is unfortunately typical for Ellis.

Meanwhile at Marvel, Mr. Ellis wrote the Iron Man: Extremis storyline. You may recognize the nanotechnological elements in the film Iron Man 3, based off the comic.

Outside of the superhero world, we have Fell. This award-winning comic simpler in scope, starring detective Richard Fell in a very dark crime drama.

There were other little books here and there I read, miniseries from Image and Wildstorm post-bought out by DC.

Ministry of Space, an alternate reality take on what if proper British gentlemen won the space race.

Red, more spies. The bad movie was based off that, sorry.

Yet even Warren Ellis sometimes misses the mark. Personally, I had to give up on the webcomic FreakAngels

The ultimate Warren Ellis opus would absolutely have to be Planetary:

The secret history of the 20th Century revealed. Imagine a world in which science fictional elements of pop culture actually exist, but all was covered up by nefarious secretive forces. From Doc Savage to Godzilla to an evil Fantastic Four.

And imagine being totally frightened by the implications of this.

27 whole issues, including some cool one shots. The crossover with Batman was very well-received.

I also read his first prose novel, the rather slim Crooked Little Vein. The tale of P.I.’s travel really being about the outsider’s capturing of the essence of America, which mostly covers disgusting underground sex scenes. Written concisely with much control and much humor, and trying very hard to gross you out. Read at your own peril.

Hope it lasts more than 12 issues.

That covers all the writers worth covering. Almost done here with my Comics Fandom series…

Next: Around the world. Notice that I’m talking about so many Brits but haven’t even gotten into Judge Dredd and 2000 A.D.

And, European comics! (both children’s cartoony and the erotically pornographic)