Back in my twenties, the prime of my life. Although I said I swore off Marvel, it didn’t take long for me to get back into the so-called ‘House of Ideas.’

It was Joe Quesada in the 2000s who headed the new era of mature storytelling for a certain biggest American comic company. He did away with the archaic comics code authority stamp, that self-censorship system imposed during in the 1950s ‘juvenile delinquency’ scare, Quesada was right to disregard, and mainline Amero comics became more like PG-13 films or prime-time television dramas. DC followed suit eventually as well, took them long enough.

I particularly had to take notice when Grant Morrison was invited to write New X-Men. That changed everything. By the by, Morrison’s first for the company (at this time, never mind the 90s Skrull Kill Krew), was Marvel Boy. Totally awesome, with high concept ideas such as a humanless corporation villain and interstellar immigration policies. And a Fantastic Four miniseries illustrated by Jae Lee.

So, while I was already there I decided give some other X-Men a go. Chris Claremont went to X-Treme X-Men, after his return didn’t work out. I gave it a chance. Chuck Austin in Uncanny was, unfortunately, considered among the worst runs ever.

Geoff Johns on Avengers, as said.

Then, Mark Waid got to write Fantastic Four! A lot of fun, and joined by the late Mike Weiringo of Flash fame. The first family of the Marvel Universe were seen as ‘imaginauts,’ as they explored time and space and other universes. Doctor Doom got a bit of an occultic retcon, and it was well done indeed. I love when Fantastic Four is done right. 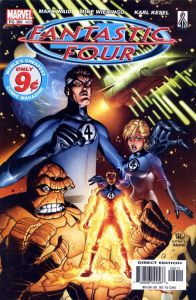 Earth X came out in 1999, but I read the graphic novel a year or so later. Created by Alex Ross initially (written by Jim Kreuger) following DC’s Kingdom Come, the dystopian premise was a future in which everyone has super powers except for Captain America. 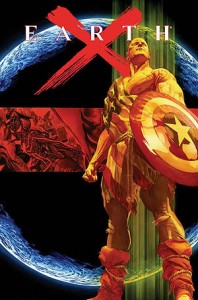 Jim Kreuger followed it up with Universe X and Paradise X, and I read all with great anticipation. Kreuger told a sort of final chapter to the Marvel Comics saga, revealing every secret character by character, giving a bittersweet farewell to everyone from Spider-Man to Galactus…

(Do prepare to see a lot of pics with Captain America standing there inspiringly, in this blog)

Meanwhile, the next big thing was to be the Ultimate Universe. Starting with Ultimate Spider-Man — written by Bendis whom I rarely cared for — it was a separate reality that was supposed to reboot everything for the sake of newer readers. Unburdened by decades of continuity, the Ultimate universe started anew with fresh modern takes on the various franchises.

Marvel Millar wrote Ultimate X-Men, and it was not good at all. Millar is an interesting writer; he’s pretty much a hack and yet a very entertaining hack. These days he’s only concerned with making comics to serve as movie pitches, such as Kick-Ass and Secret Service.

There wouldn’t even be the Avengers film phenomenon if not for Ultimates.

Millar was very successful at turning the Avengers into an incredibly awesome action movie franchise. Of the ‘widescreen’ style, written snarkily like the wittiest rated R cult classic, there was Captain America as WWII badass, homicidal Hulk, and biggest impact of all was Tony Stark/Iron Man as self-obsessed genius asshole. Thor as a new age guru was an interesting take. The super team and S.H.E.I.L.D. were all presented bit fascistic if you analyze too much, yet what a ride.

Very quotable. Cap: “SURRENDER??!! You think this letter on my head stands for France?” And when the villains overtake Manhattan: “The Great Satan has been liberated.”

With the climax of the first volume fighting aliens, familiar? I must admit I am definitely invested in the Marvel Cinematic Universe, and I fully give the Ultimates their do!

Other Mark Millar impacts included the crossover Civil War. Which will be getting a movie.

I didn’t read most crossovers of that decade. Secret Invasion by Bendis, no way. Fear Itself, yawn. Civil War was on of those cynical ‘realistic superhero’ tales in which Captain America goes to war with Iron Man over government registration of superhumans. The trade reprint seemed worth a read at the bookstore but not buying.

Spider-Man famously gave up his secret identity at the time, siding with Iron Man and revealing himself on camera as Peter Parker. Obviously, there was a retcon soon after and that never happened; back to the ol’ status quo for Spidey.

Afterwards, Cap was assassinated and resurrected Bucky/Winter Soldier replaced him for a while. I read some of Ed Brubaker’s run, it was critically acclaimed and so on, but kind of boring with all the predictable resurrections.

Lastly, Avengers vs. X-Men. In order to get into that, allow me to introduce Jason Aaron.

A very interesting writer, I came across Aaron by way of his war graphic novel The Other Side from Vertigo. He also created the Native American crime comic Scalped, but soon became most successful with Marvel superheroes. Wolverine writer of all things. I didn’t read much of that sort, but I did check out Wolverine and the X-Men. It was funny and weird scifi and even referenced the Grant Morrison era. Not bad. By the 2010s (and don’t forget I had now been living abroad), it was my first time in years reading X-Mens. 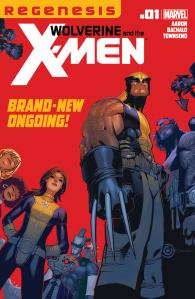 And then… came the epic crossover Avengers vs X-Men, cowritten by Aaron himself. It also signaled the end of the horrible Bendis New Avengers era and I supported. One thing in particular I hated New Avengers was Wolverine as an Avenger, which was kind of a major plot point by then with him stuck in the middle. Doesn’t anyone ever get tired of Wolverine?

Basically just a fun read, big dumb fighting as the Phoenix force came to Earth and the mutants fought against Earth’s Mightiest Heroes for the future of their race and/or saving the world. Cyclops went evil, man.

On a final note, the works of writer Jonathan Hickman:

Fantastic Four again, Hickman’s run was cosmic. After hearing about the buzz, I read the whole thing online and I wasn’t disappointed. Although the death-rebirth thing with the Human Torch was a bit too much resurrection already, such a comic cliché. I really enjoyed the alternate Reed Richardses and Celestials and Infinity Gauntlets.

Hickman has currently been writing the core title Avengers over the last several years, and I have been doing my best to read them as the come out. It’s all about to come to a head, after some excruciatingly slow cosmic buildup (crossover Infinity in the middle there) with the climax any day now. The Illuminati, Tony Stark’s redemption, multiple earths crashing into each other, etc.

Secret War will be the big deal finale, and Hickman will be in charge of Marvel’s first ever across-the-board complete reboot. The Ultimate Universe will be gone too.

Should I take that as a cue to stop with the Marvel, or should I read more to see what happens next? 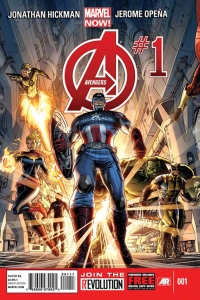 And those are the Marvel Comics I read as an adult. Colorful. Enjoyable. Good guys versus bad guys. Not really the most literary thing in the world. I may or may not be growing out of this. The truth is deep down I kinda can’t stop loving it.

Notice I have left out writer-artist Jim Starlin, creator of Thanos and the Infinity Gauntlet and master of all things cosmic. Some of which Hickman himself heavily referenced in Fantastic Four and Avengers.

Also, Starlin produced the greatest Marvel Comics of the 1970s (prior to my personal birth but well worth going back to read), before bringing it all back in my 90s childhood, and he still produces fine work to this day. I will have more to say shortly.

Next: Jim Starlin and Marvel Comics of the 1970s