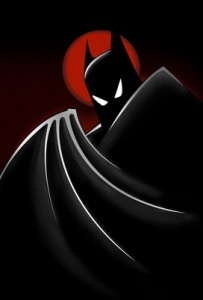 Finally, everyone’s favorite superhero. Though I was never the greatest Batman fan in the world, what with all those more interesting escapist science fiction characters out there, I have read a lot of Batman over the years and it would behoove me to not elaborate.

He is central to the DC Universe, the resident hypercompetent genius who always has a plan to save the day. It’s not really ironic anymore that he’s beats everyone else with super powers, we get it already, and Batman is super smart and super cool. He does, obviously, have the best villains in all comics.

Bob Kane created Batman in 1939, though really Bill Foster contributed much of the mythos, and he was quite dark at first. Soon however, came the whimsical wiles of the Golden Age to the Silver Age and he got pretty ridiculous. He’s bounced around from camp to serious over the years, with various incarnations acted by Adam West and directed by Tim Burton.

My favorite incarnation ever is still the brilliant Animated Series, produced by Bruce Tim and Paul Dini and expertly voiced by Kevin Conroy. Mr. Conroy remains the absolute best Batman actor of all time, and I’ll fight anyone who says different. 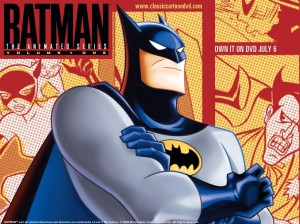 Back in the world of comics, Batman had a resurgence in the 1970s as writer Dennis O’Neil and and classic artist Neal Adams took Batman to his darker roots. They also had a James Bond sort of vibe, has he traveled the world fighting Ra’s al Ghul.

It wasn’t until 1986 when Frank Miller — of pre-Sin City fame — came along that things went real ‘grim n gritty’ dark. The Dark Knight Returns, still considered one of the greatest graphic novels ever, was about a futuristic Bruce Wayne coming out of retirement and fighting a corrupt Gotham City. Then he fought a corrupt United States government, as Superman was an asshole stooge of Ronald Reagan. It almost comes across as satire today (indeed, Miller’s later work cannot be taken seriously at all) but it was just so amazing and has aged wonderfully. Reread it today, I dare ya, it’s epic. 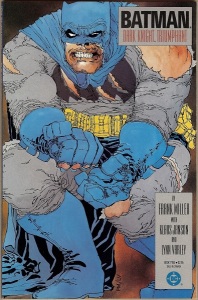 Frank Miller returned for a reboot after the Crisis on Infinite Earths in 1987, with Batman: Year One. Miller only wrote, and David Mazzucchelli drew. It was a fine story, a bit short for my tastes without a proper ending. Yet, modern Batman wouldn’t be Batman without that tale.

1988 the mainstay Batman titles were still normal superhero comics, but they needed more tension. DC decided to hold a vote to kill the unpopular second Robin, Jason Todd. The original Dick Grayson had become Nightwing over in New Teen Titans. It was a gimmick that added real tragedy to the DC Universe, as the Joker beat him to death and Batman could forever remain guilty. Joker being a middle-eastern official with diplomatic immunity at the time, a surprising twist. Yet, it wasn’t the grim gritty kind of thing, as the story was firmly set in the science fictional universe with Superman coming to help. Death in the Family, written by Jim Starlin. 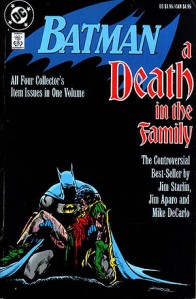 The followup crossover with New Teen Titans was also firmly set in the greater DC Universe, and then introduced the third Robin Tim Drake. More on Batman’s various partners shortly.

There were many a-Batman crossover throughout theyears. Like Marvel’s X-Men, the most popular property gets to milk the readers as much as possible.

That and 90s excess, and you have the worst of it: Knightfall. In 1993 Bane was introduced, yes like the movie, and the prison-raised South American (not Germanic) hatched a devious plan to BREAK the BAT. He let loose Arkham Asylum and then when the caped crusader was at his worst he broke his friggin back. All this just as Superman was dying mind you, it was the thing back then. With Bruce Wayne crippled, the antihero Azrael armored up and took charge of the cape and cowl. Sooner than later things were back to the status quo.

In 1999, standards were higher and the crossover No Man’s Land fared much better. Gotham City had been destroyed by an earthquake and the government had given up, which led to total anarchy. Fun times. Later, Lex Luthor would rebuild it all and it set him up for his presidential bid.

I always liked when Batman faced wits with Lex Luthor and Superman battled the Joker.

I don’t know if this counts as Superman or Batman, but one classic story was Emperor Joker in the Superman titles. One homicidal maniac had tricked the 5th dimensional imp Mister Mxyzptlk into giving up his omnipotent powers, and the Joker with cosmic reality-warping powers was a threat indeed.

The company-wide crossover Joker’s Last Laugh by the great Chuck Dixon utilized the rich mythology of the DC universe well.  The Joker had been transferred out of Arkham, which made perfect sense after all those prison breaks, and put into the maximum security prison for superpowered prisoners. He subsequently starts a prison riot and then mixes up chemicals to turn all the villains into jokerized versions, and with help from teleporters leashed hell upon the rest of the world escaping more villains from multiple metahuman facilities. It was rather awesome. There were many tie-ins, Doomsday as jokerized was notable for example, but it was primarily about the Batman family. Chuck Dixon especially wrote well in his three Bat-family books: Robin, Nightwing, and Birds of Prey.

(More on Chuck Dixon and the Bat-family below…) 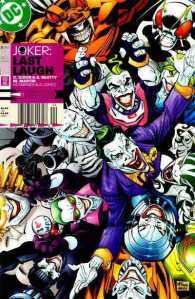 Another seminal writer I could go on and on about is Grant Morrison. His Arkham Asylum graphic novel way back when was brilliant. In the later 2000s, after his proven success writing Batman in JLA, he came to write the main Batman title. He started out with a bang, introducing the latest Robin as Damian. Who happened to be Bruce and Talia’s estranged son.

Morrison went very far with taking Batman in psychedelic directions, and getting dark when necessary but also having fun. The premise was that all Batman stories ever were in continuity, including all the silly weird ones from the 1960s. Instead of ignoring the corny aspect, he embraced it. That’s what the superhero genre is truly all about, in my humble opine.

Then there was the Batman R.I.P. event in which he went crazy and “died” and then Darkseid killed him in Final Crisis, then Dick Grayson replaced the mantle for a while. I had mixed feelings about that. Wasn’t long before Bruce came back.

My personal highlight was the short-lived Batman Incorporated series. That was the climactic peak. The cheesey Batmen of All Nations from one 50s comic were expounded upon to a viable saga. Batman never was a loner, it made sense. Not just teaming up with Superman, and joining the Justice League, and partnering up with Robin(s), but the Outsiders and affiliation with the Birds of Prey network as well.

Too bad New 52 interrupted Grant Morrison’s arch, but it did conclude nicely. Written by Scott Snyder and illustrated by Greg Capullo, I read the new Batman for a while and it was pretty good, the intriguing Court of Owls storyline etc. Beautiful pictures in particular.

But here’s the thing. He’s great and all, but what I what I truly find more substantive are the spinoffs. The Bat-family.

Batman suffers as much as from what everyone says about Superman: He’s too perfect. Though human, he’s the most perfect human ever. Works better as a mentor overseer to other heroes.

Chuck Dixon in particular built himself a great corner of the DCU. First there was the Tim Drake Robin’s solo. I read all the way to issue # 100.

Then the amazing Nightwing drawn by Scott McDaniel, a major hero in his own right. The city of Bludhaven and everything. 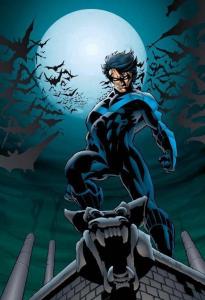 Best of all, Birds of Prey! Bringing back the kickass women superheroes so sorely neglected. Barbara Gordon, computer genius and former Batgirl (crippled by the Joker in Alan Moore’s The Killing Joke), was reborn as Oracle. She would send heroes on missions, like Black Canary and other lesser-used characters, now brought to their full potential. These were solid adventure stories, nothing better. That is, until Gail Simone took over as writer and it actually got even better. 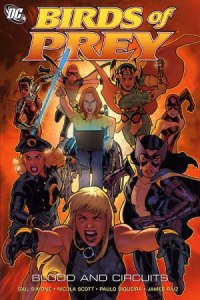 She’s a great author, hilarious and gruesome all at once. Full post later.

That’s Batman and the Bat-Family.

The following, something completely different. I have gotten all the important American superhero comics out of the way. Marvel and DC, X-Men and Superman. Sorry Avengers. I’ll be back and get into more specific writers I like, such as the aforementioned Gail Simone, Grant Morrison, Alan Moore, and others I could just go on about forever, plus indies. It isn’t always about superheroes.

That’s right, it can also be about robots. And ninjas.

See, there’s a whole other country with an even bigger comics tradition than the United States…

Up next: Japanese manga