Due to moderate demand, this weekend’s edition will focus on the random T-shirts with nonsensical English which Chinese people tend to wear. In fact, this is a broader Asian phenomenon but I’m in China so it’s Chinglish.

I likened it to bad kanji tattoos Westerners get, but at least it isn’t permanent.

Some of the best I haven’t been able to photograph. I used to have a neighbor who had a shirt she’d often wear that spelled out DYKE in big bold letters; I could be wrong but she didn’t seem the type. There was the 6-year-old whose shirt said I LIKE SEX. And so on.

Some of these pictures are awkward because I had to ask the wearer randomly in the street if I could photograph them.

These may not be as good as the mistranslated signs, but without further ado I hope you get a few laughs here:

I think this is one of those ironic novelty shirts from Khao Sarn road in Thailand or somewhere like that. I don’t think the wearer knows what Ecstasy is meant here, but ya never know. Use responsibly.

More drugs, it’s a way of life for freedom right

Cheerio! Get it? I totally get it, guvnah’, if only this ping pong player got it

Monster, what a little monster 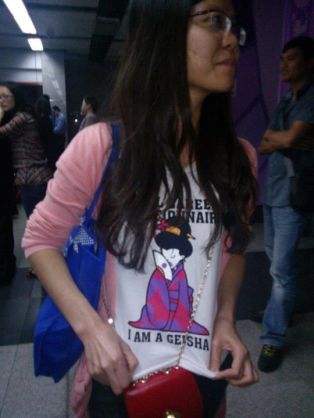 Perhaps this isn’t random, just cute. In our hearts aren’t we all Geishas sometimes?

And lastly, a random assortment of cutesy words, schizophrenic word salad style yo