I think we can all agree that the 80s was among the top decades ever. In the world of comics (at least, American mainstream superhero comics), it was the decade the medium finally matured into a respectable art form for adults.

I definitely grew up on Marvel, but in my later teens I chose to focus on DC, and from my early and mid-twenties I spent untold hours scouring for back issues to fill in the historical gaps.

The truth is, Marvel was revolutionary in the 1960s but DC — that stuffy old company famous for square-faced Superman and Adam West-era Batman — did catch up. Green Arrow/Green Lantern by Dennis O’Neil in the 70s comes to mind. By the 80s, there were plenty of literary books.

As for Watchmen by Alan Moore and Dave Gibbons, and The Dark Knight Returns by Frank Miller, it says a lot those seminal tomes were published by DC. But you’ll have to wait until my inevitable Alan Moore and Batman-themed posts for more on those. Same bat-time, same bat-channel!

Allow me to skip ahead in the timeline of the DC Universe, whereas the centerpiece would definitely be 1985’s Crisis on Infinite Earths. The mega-crossover revitalized the entire multiverse, with a cosmic menace requiring the heroes of all the different earths and time periods and planets, and an ending that took all the realities and put them into one big universe. RIP Supergirl and Barry Allen Flash…

Written by Marv Wolfman and illustrated by George Perez, it was a masterpiece.

Speaking of which, to go a bit further back on that creative team: Wolfman and Perez tother first came to prominence with the New Teen Titans. We forget now, but for a time they were the rivals to Marvel’s X-Men. That successful.

Sidekicks Robin, Kid Flash, and Wonder Girl were joined by newcomers Cyborg, Starfire, and Raven. Changeling/Beast Boy too. You may know the cartoon. 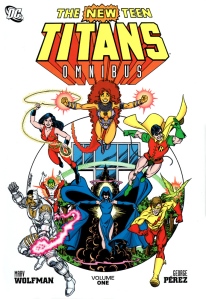 Cyborg was futuristic-transhumanist science fiction, Starfire was space opera, and Raven was supernatural horror. All the neccesary genres for superhero adventures. Add that to character development and the occasional soap opera storylines, and the formula made for solid great comics. Too bad the Titans have never been able to live up to that pre-Crisis era since.

Pre-Crisis DC, that was back when there were all those numbered Earths. The Golden Age 1940s continuity was called Earth 2, with the Justice Society and the original Action Comes #1 Superman. Writer Roy Thomas, who might be the most knowledgeable man in all the field, wrote about the WWII-ea in All-Star Squadron. It was followed up Infinity, Inc., which wasn’t as good but interestingly showcased the sons and daughters of the Justice Society in modern times. I do like my superheroes generational, a sense of history. 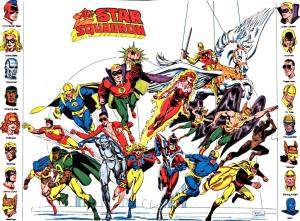 Then Crisis happened. All those Earths were now one. History was rebooted. Earths 1 and 2 had the same timeline all along. It’s confusing, I know. 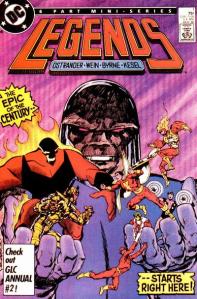 Then, the Suicide Squad grew out of Legends. This ragtag team of supervillains employed by the government was, in a word, awesome. Very cool, very badass. Who knew corny DC villains could be written with such edge? Captain Boomerang, Deadshot. And a lot of the characters died in these suicide missions, some of them not even coming back to life. And who doesn’t love Amanda Waller?

Apparently there will be a movie of the squad soon enough. 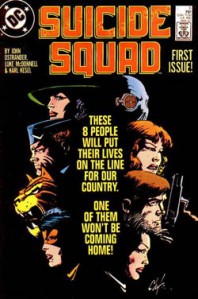 Most important of all, the new Justice League evolved out of Legends. It was the latest incarnation, the Justice Leauge International, most often referred to as the “Bwahaha! era.

Believe it or not, it was a comedy comic. Cowritten by esteemed writer J.M. DeMatteis and Keith Giffen, it kind of showed what it was like to hang out as a superhero in the off time of saving the world. It had Guy Gardner as Green Lantern, who was refreshingly a dick for a superhero, Martian Manhunter as elder statesmen, best buds Booster Gold and Blue Beetle, girlfriends Fire and Ice, and of course Batman being super cool Batman.

I tracked down every single one of those issues. I still have the full run to this day, including Justice Leauge Europe. They did fight supervillains like Desparo and had crossovers with the extremely serious Suicide Squad, but mostly it was a return to comics being fun. Unfortunately, after Giffen and DeMatteis left the League became convoluted through the 90s until Grant Morrison revitalized the franchise with back-to-the-basics JLA. But that is a post for another day.

Now that DC was in the annual crossover game, it was Keith Giffen’s turn. I enjoyed Invasion, in which a consortium of alien invaders tried to take down the growing metahuman threat from the planet earth.

What really signifies the post-Crisis DC universe of the 80s were the reboots. Many of the classic characters started over from scratch, with acclaimed new takes. No baggage, new beginning steps with the very best foot forward, those were the comics worth reading.

Wonder Woman was written and illustrated by George Perez, who did a phenomenal job focusing on ancient Greek mythology. Finally the character got the recognition she deserved. Wonder Woman has never been as great as since then.

Green Arrow by Mike Grell was interesting, in that it wasn’t even really a superhero book. Although it technically took place in the larger universe, there were no science fiction or fantasy elements allowed. It could be read as crime genre, cutoff from flying aliens and superpowered metas. Dark at times, Green Arrow would kill his foes if the situation called for it. Dinah Lance, the Black Canary, lost her powers in a particularly graphic torture scene and all was assumed to be real world.

Hawkworld by Timothy Truman was quite good. The once cheesy space policeman Hawkman from the planet Thanagar, now portrayed as a nightmarish totalitarian world. After the initial reboot origin story, he and Hawkwoman went to Earth after the Invasion! as Thanagarian ambassadors. 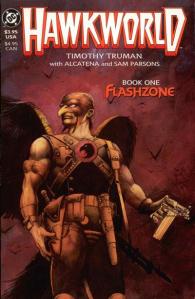 Actually, these reboots caused many continuity problems. If Wonder Woman and Hawkman had only just been introduced in this new version of the univese, then who were those heroes in the previous incarnations of the Justice League? How could Wonder Girl be in the Teen Titans if she predated Wonder Woman?!

It got convoluted. It was said the Golden Age Hawkman was in the Justice League, then a spy. Black Canary replaced Wonder Woman. Wonder Girl’s origin was a mystery slowly revealed and retconned. And the whole Legion of Superheroes having Superboy as a member, but Superman never was Superboy, that got really complicated.

Hence, DC has made it a habit to blow up their universe every decade or so to smooth out those issues. Eh.

Actually, the 80s were about Superman as much as they were about the Crisis.

John Byrne came to DC do make the world’s most important superhero relevant again, and in my view he largely succeeded. 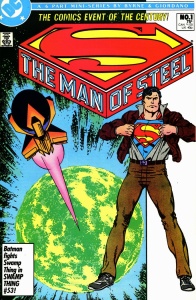 The Man of Steel miniseries was different than the other reboots, because it took place in the past. Superman’s origin was retold, updated, Krypton was more credible and no Superboy or multicolored kryptonite. But he did still have the history to be a founding member of the Justice League and be friends with Batman and all that. The new Superman # 1 was about a character who already had a history.

The 80s Superman was also notable for introducing the new Lex Luthor (actually Marv Wolfman’s idea). Previously just a mad scientist, the ‘Wall Street-esque’ incarnation was now a businessman who could never be truly defeated. Some fans are purist detractors who don’t like that Lex Luthor, but I think it made for some very interesting dynamics. And since then, different version of Superman from the Animated Series to Smallville have utilized Lex as such.

In fact, I have a lot more to say about Superman and his various villains and my personal taste. The deaths and resurrections and haircuts and electric powers. Doomsday. Braniac. The Legion. Worlds at War. All-Star. Various creators from Dan Jurgens to Mark Waid and Grant Morrison. More reboots.

Yes, more important than Batman. I will get into that.

Next: Superman through the ages

(and after that, I will get into Batman… Batman: Year One, Death in the Family, 90s Batman crossovers, Frank Miller, Chuck Dixon, the Bat-family..)