Like many kids of my generation, I grew up with Nintendo. Sega was a competitor for a while there, but I was always a loyal fan of Mario. Then real life happened and I didn’t have much time for video games anymore. Meanwhile, hardcore gamers became more and more intense over the last decade(s), with mega time-consuming complex gaming reaching a levels every year. And I have since become a cranky old man lamenting that games aren’t what they used to be.

More power to the modern gamers; I am very much a geek in my own ways and they can do what they want. There are various criticisms which can be lobbed at the gaming subculture, but I don’t intend to get into that here. I just want to share what games I like.

Few years ago I got my NDS, and quite enjoyed it. I require a lot of entertainment and stimulation, so when I’m bored on the bus or waiting in line at the airport I will take my paperbacks and audiobooks and text everybody as well as play video games. I likened the NDS to having a Super Nintendo in my pocket, but even better because I can start and stop anytime I want to. Play for ten minutes, save, go do something else, then play again for five minutes to several hours. Worked very well for a casual gamer like me.

Dare I admit that the NDS was very hackable and I live in a land where people pirate everything? I downloaded the whole catalog, sorry, but then when I was over it I simply had to get the 3DS and get the new games. Which meant I had to buy the real ones, American editions, during my frequent trips to Hong Kong. 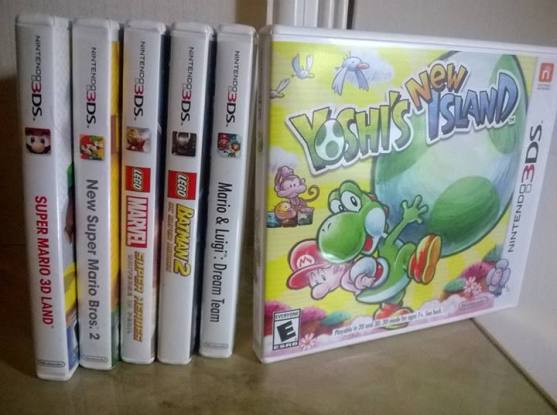 As you can see, I primarily like Mario and Lego. SO MUCH FUN. I beat New Super Mario Bro.s 2 and Super Mario 3D Land and found all the hidden gems and won it as expertly as possible. Mario is basically what it’s all about for me. The Mario & Luigi RPGs are great fun too, and nice and time-consuming (but still a childish enough RPG to suit me). Dream Team was satisfying but I definitely preferred the previous installments Partners in Time and Bowser’s Inside Story. Now I’m playing Yoshi’s New Island, which again is good but I liked the NDS one better where you could play as other characters such as baby Donkey Kong and baby Princess etc…

I also enjoy the Lego games. Batman, Star Wars, except for Lord of the Rings. I can geek out on so many levels. Batman 2 was absolutely great, especially with playing other DC superheroes: Superman, Green Lantern, Flash, Wonder Woman, everybody! It stood to reason I would equally like Lego Marvel, what with the enormous cast of colorful characters, but unfortunately the handheld version is just not very good.

Another debatable issue that I’m not going to get into, DC versus Marvel. I surely have my prejudices, but I’m only talking about the gaming aspect here.

Perhaps I should get a Wii U console at my place and get Lego Marvel the way it was intended. And play more Mario and whatever else. I could invite friends over, have parties, it would be fun. I’m considering it, yet it really would put a damper on my time-management issues.

As said, I usually buy everything in HK. I could get a Wii U there. That’s at Wanchai Computer Centre in particular, my favorite place (no way Mongkok). But on my recent trip back to the States I had to stop by Gamestop to see what I can see.

And wouldn’t you know it, I discovered something I didn’t even know I needed.

I never use the Nintendo eshop online sorta thing, but perhaps I should start. I began with purchasing $10.00 gift card in person, and decided to download a bit. And I realized there are a plethora of old NES and Game Boy games for the cheap!

Yes that is Super Mario Bros 3. One of the greatest games in history, possibly THE greatest game in history. For me to play in my hand whenever I want. Hells yeah.

I’m actually looking forward to my next long flight, I will be so very entertained.

And still have money left over, what should I get next?

On the next nerd edition of Ray H, I will share my collection anime toys…