Part 2, the continued story of How I Came to China: Burning Man

After my amazing week of sights and sounds on the Black Rock desert scene, the amazing people I met and the beautiful visuals and even a few hookups, it all culminated in the final night – in which they Burn the Man – and then I got to take LSD.

Now, the psilocybin mushroom is my drug of choice. I have the most experience with it, I am a big fan of Terence McKenna’s spiritual theories on the subject, and I believe that the therapeutic aspects of these experiences literally saved my life during a sensitive time in my upbringing. It’s natural, healthy [aminita muscaria is the shamanic poisonous mushroom, psilocybin is completely nontoxic, I do know what I’m talking about on this subject], and extremely powerful. It’s a psychedelic and obviously non-addictive (come on, a psychedelic trip is something to do once every few months at the most), and I’ve never even come across any law enforcement official who gives a shit about mushrooms. Something I certainly recommend for everybody, and hey to each their own.

I heard there were shrooms going around the Burner community, but I wouldn’t like to do it in a party atmosphere. It’s unfortunate that entheogens tend to turn up when you’re around loud noises and crowds, better to do it in times of quiet contemplation. Set and setting, very important.

Anyway, the twilight of the event and there were parties of dancing naked people around the periphery of the immense burning statue and I wandered as much as I could to seep in each and every sensory perception. I met some nice Australian couchsurfers and they mentioned acid and we actually did the barter economy thing. I traded my indie comic for a tab—how cool is that?

This was my first and only time with LSD, at least with good LSD. I’m not opposed and would very much like to try it more often but it’s just been so elusive for me. I’m just not that cool to have the proper vibe. Perhaps the universe is trying to tell me something. That’s okay, I’ve had plenty other.

These days, South China tends to have a lot of party drugs, the kind that are more shallowly fun and dangerous. Sadly it’s not a psychedelically-inclined place. That’s Rising China, nothing deep of substance here. But I’m not complaining, the nice economical thing about true psychedelics is you can take it once every few decades that that can be plenty.

This was a plentiful dose indeed. I found the lysergic acid diethylamide chemical to be far more euphoric than psilocybin. Not scary, no bad tripping episodes. The hallucinations were more subtle, things bending and stretching and amazing colors when I close my eyes but not quite the intense melting sensations of organics. Less nausea-inducing than my other psychedelic experiences as well, such as ayahausca. 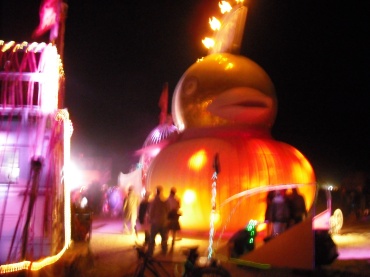 Back to the story at hand. For the next twelve hours I was gleefully rolling around on the sandy playa. Kind passersby would ask me if I was okay, and I’d say I was fine and had no self-conscious issues at all. I looked up at the stars to see one of the most stunning sights of my life, as you can see the real sky when you’re in the desert, and suddenly I understood how the ancients conceived of constellations. I saw infinite UFOs connecting the dots of star points with streams of light dancing upon infinity…

Post-peaking, I happened to smell the familiar smell of a fire pit and gathered around with a crowd to keep warm. I met a gentleman in a bathrobe who Randomly mentioned he spent some time in China.

“I wanna go to China,” I muttered.

We got to talking, he said it was doable to get me a job. Guess which one, but that’s besides the point. It was most definitely the kind of thing I was ready to try. The only hard part was scrounging up a pen so I could record his contact information.

“Can someone give me a pen so I can ship this man to China? Seriously!”

Synchronicity. See? Magic does exist and it’s all about shifting your brainwaves.

I have always been interested in Asia. Travel is nice but I wasn’t sure how to go about moving abroad. My early fascination with the East began, I will admit, with Japanese anime cartoons and manga comics. I’d been to Japan already. My hobbies grew to live-action cinema and in my youth I then became captivated with the mainland films of Zhang Yimou and Chen Kaige way back in the 90s. Farewell My Concubine was my all-time favorite. Wong Kar Wai the incredible Hong Kong indie director as well, though I never got into HK-action movies. I also read some novels by Mo Yan and Su Tong. So yeah, I was interested in going to China.

It’s like that drunk conversation where you’re with your friends and everyone says we’re gonna do something, but usually you don’t do it. Start a band, enact a project, save the world. There’s so much enthusiasm during inebriation but as sobriety sets in you usually forget about it. Well ha! I actually did it.

My Random friend remains a pal to this day. He later went back to China and brought me some psilocybin chocolate by the way, a story for another time, and later I visited him in Caly in 2010.

So the night continued. I wandered and wandered, bumped into him again at Center Camp and shivered as the glimmering sun came up. Couldn’t sleep, under the influence y’know. The new day came and I was reborn and reprogrammed with optimum positivity and it was time to go. I said goodbye to a girl and readied for the long trip back down the coast.

Parted with my road trip mates and went home to the LBC and set my things in order. I looked up my new pal, and then went on another road trip from California to Texas to Ohio which was a whole other adventure in and of itself. Made some decisions and flew off. Off to start a new life. Then I did. Started humbly, and it got better and better and I’m still living it right here and now.