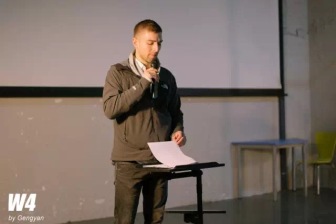 Guangzhou-based poet Aaron Styza organized and spoke at the Yi-Gather event of which I was a part of last month. His poems have been published on Heron Tree, Sediment Literary Arts Journal, and Two Cities Review.

As he is a talented writer in China, I thought it would be nice to interview Sytza and talk about the craft. Little did I know what a fascinating conversation it would be:

(Also, not that I am an expert at poetry but I have occasionally tried to expand my own writing palette…)

What issues or answers does poetry provide or provoke for you?

I’m concerned with the limits of language: how can we measure the effect of what we say? The truth is language cannot adequately express anything. If language were able to express the complexity of thought, there would be no need for poetry. I would say X, and you would understand X. This is not the case. But the inherent inadequacy of language is the very thing that gives poetry its agency: the freedom to investigate a subject obliquely rather than approaching it head-on. Language has a duel effect that causes intense intimacy and terrifying alienation, like birth.

The relationship (or metonymy) between intimacy and alienation haunts a lot of my poems.

How has China shifted your aesthetic focus?

The personas in my poems are often coping with psychological trauma. And like a patient hypnotized into summoning their repressed experiences, poems replay that trauma. Trauma manifests itself as a subjective experience and as a reoccurring, collective experience.

Myths and Fables are a great example of a collective experience: something so ingrained in a culture that it’s inextricable from it. They are our first life lessons and indelible marks on our consciousness. I allude to, and re-appropriate, elements from such sources to “fable-ize” modernity. That is, distance a subject from its context and place in time. And China, with its innumerable stories derived from different characters and dynasties, has opened up a new store for me to work with. This may further reinforce what I said earlier about intimacy and alienation.

What poetic conventions do you avoid or adopt?

I tend to avoid intellectual witticism most, because that techniques imposes the writer’s voice too much and becomes didactic. I admire the poet Robert Frost for his ability to ground his subjects in reality, without intruding his predispositions onto the poem. Even the times when Frost’s voice spikes through the poem—I’m thinking of his piece “West-Running Brook”—he’s laughing at himself, poking fun at his own authority (this is one of many subtleties in Frost’s work which caused him to become one of the most misread and mistaught poets). Yet his representations of the world are some of the closest poetry has come to accessing the humanities. For him, surrendering to the world was a release from it.

Grounding poems in common, understandable images aligns with my own goals (or tastes), rather than getting tied up in heady, theoretical subject matter, or racing to create a new poetic form, which is plaguing a lot of contemporary writing. I’m a sucker for crisp, well-laid images.

As it pertains to artistic inspiration, how does being in Guangzhou, China, contrast with the Mid-West in the United States?

My command for speaking and reading Chinese is not advanced. So when I’m cruising around the street or listening in on people talking, I catch snippets of speech, flashes of images from pictographic characters. In the US, I get it all—I’m right in the middle of the noise. In China, I’m always at a distance. There’s a lesson on silence in here somewhere. What details can we get away with leaving out, and which are essential to the movement?

What poets and poems have inspired you the most?

Two Bobs come to mind: Robert Frost and Robert Bly. Their books are indispensable, inexhaustible resources which I never tire of reciting: Bly’s collection Silence in the Snowy Fields, and the majority of Frost’s work, especially “After Apple-Picking, “Birches”, “Bereft” and “West-Running Brook.”

What brought you to poetry in the first place?

Growing up, I had an affinity for drawing and painting. It was natural for me as well as my siblings. I switched to poetry as an aesthetic choice. I wanted to make larger jumps between ideas, abstractions, and images, without losing structural integrity. Each medium in art has its own particular, idiosyncratic limits, and painting couldn’t facilitate how I wanted to evoke, neither could short stories, but poetry could. There’s also less of a material burden.

Here’s a story I’m fond of: once my brother drove from Wisconsin to New York with his girlfriend to collect some paintings he had left behind when he was studying there. The car was loaded down, but he couldn’t fit one of them—the very painting that compelled the journey in the first place. Too costly to ship, too unwieldy to fit, they set it down near the park, sat at a bench across from it, and waited there until someone walked away with the thing. There’s a photograph of him lighting a cigarette next to the painting as he’s leaving it on a street in New York.

Language is always with you, and it’s light.

These medical masks aren’t for surgery,

They’re lotus flowers for the mouth.

The air’s killing us slowly.

Let me tell you a tale about the Emperor

Who planted sorrow in his garden

Because he longed for his late wife

And the bit where the shadow puppeteer

Molded her likeness in clay

And danced its shadow on the wall

Behind a candlelit curtain.

The Emperor teemed with song again.

The Pearl River takes the heart away,

And, dear, the water’s just fine.

But I’m so thirsty.

So thirsty, I drink your words.

So hungry, I carve the sky with a knife.

As for loneliness, well, I left out the detail

That the Emperor had other wives.

Getting as lost in form as Narcissus once.

The curtain ripples—blink and she’s there:

No, she’s combing the passages of his hair.