It’s been a while since I had any interviews with bloggers, but I have a great one for you now! Presenting Timo, of the blog Crazy Chinese Family. I recommend you check it out, one of the best for East meets West stories about the wife and cute kid and of course the crazy Chinese mother-in-law… 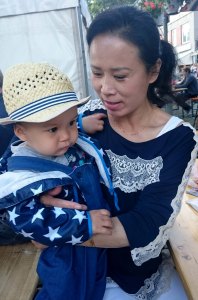 I am actually not really sure what inspired me. I tried out blogging about ten years ago for a while but never really stuck with it and gave up after few months. Probably this was due to the non-existing focus. I was blogging about all kinds of things from art over economics to sports…

It took me a long time until I started with CrazyChineseFamily in 2013. Back then I had been together with my wife for over three years and somehow stories about my crazy Chinese mother-in-law just piled up. Then after my in-laws had been at our home in Finland for nearly a month I just couldn’t hold back any longer, I needed to share those stories and thus this blog was born.

What kind of blogs do you enjoy reading?

I love reading all kinds of blogs but the majority is about interracial relationships especially between Westerners and Asians. Other blogs are about travels, food (I just love food!) and also personal blogs by authors. Why authors you might think… Well, I actually started to write a novel some years ago but never even finished the first draft. Because of this I am really interested what tips sometimes authors share on their blogs, what hardships they go through, what they like to read and so on.

What kind of books do you like, and who are your favorite authors?

It is all about fantasy for me. I can’t say why but I just love the fantasy genre, nearly my entire book collection is about that topic. As any Fantasy geek my favorite author is Tolkien but there are so many other talented authors that I will just throw in a few of them randomly like Patrick Rothfuss, Steven Erikson, Robert Jordan, Brandon Sanderson and so on.

Besides fantasy books I also got a small manga collection. I guess I have roughly 300 manga in my shelves though I haven’t bought any new one for at least eight years. I have read mostly Shōnen and Seinen manga. Examples are Akira Toriyama’s Dragonball series, Rumiko Takahashi’s Ranma 1/2 and Inu Yasha, then of course Kouta Hirano’s Hellsing, and Kentaro Miura’s Berserk. Besides these manga which are much about fighting, I also read all kinds of other genres such as some cooking manga, or many about sports such as by Mitsuru Adachi. Now that I moved back to Germany I already took some notes on what manga are still missing in certain series, so I guess there is still hope that I will get back into this whole thing again.

You get personal in your blog at times. Have you ever gotten in trouble with your wife or mother-in-law by sharing too much?

My wife has no troubles about what I write about and truth to be told, my mother-in-law has no clue about this blog. I can’t even imagine what her reaction might be. It could be anything from being pissed at me, forcing her daughter to divorce me, or feeling honored and what not all else. She is a very unpredictable person so anything is possible.

However I have no doubt that she has her own micro blog on Weibo writing about her crazy son-in-law. As I never really write anything about myself my readers actually don’t know what kind of wacko I am myself but I have some blog posts planned to give more insights about that weird guy who writes about his crazy Chinese mother-in-law, but this is still work in progress soon.

Some of the situations your MIL gets into seem very stressful! Is there an element of therapy when it comes to sharing by blogging?

Definitely! I started to blog because there was just so much crazy stuff going on with my MIL. When she was for the first time with us in Finland weird things just happened on a daily basis. Not only that she did weird things but also her behavior such as that she never ever does anything wrong, it is always someone’s else’s fault…

So when I started to write these things down it help me to relax a bit even with her around. The hard part back in Finland was also that our apartment was tiny so there was no way to avoid her except by clearing my head through blogging about her and the rest of the family.

You know the feeling when you go with a little child to the Zoo and the little one got troubles getting animal names, right? It is pretty cute as you know that everything is still so new to them and that they have enough time to learn during their lifetime. This whole thing ain’t cute any longer when a grownup is calling a polar bear a sea lion, a seal is suddenly a big fish and a lynx transforms into a tiger. This particular grownup is my dear Chinese mother-in-law. According to herself she is the biggest animal lover in the world who knows how to treat them right. Ehm…perhaps in a sick and twisted parallel universe. She can’t tell what animal is right in front of her, she gives dogs the spiciest food she can get and she doesn’t understand why a dog should take a walk more than once a month. Anything else I should add to help you understand why I am so amazed by her animal love? I think not!

What originally brought you to China in the first place?

Pretty much my wife. Before I met her I didn’t have so much interest in China, I didn’t even eat much Chinese food before. All I knew about the country was from the news or what I learned back in school, nothing more. This changed when we started dating and I researched more about the country and the people in order not to appear like a total idiot in front of her. Some of my research back then helped, other stuff was pretty much useless such as learning more about the political situation etc. as she has even less clue about it than me back then.

In 2011 we had our first trip to China and it was amazing. I loved it right from the beginning, especially my wife’s home Xi’an. However I can’t imagine myself living there for a longer period but anything is possible in the future.

What is the story of how you met your wife?

We actually met in a Finnish course at the University in Finland. She was sitting in the row in front of me but we didn’t talk with each other for a long time. In fact we didn’t start talking until nearly a year passed by. I must say that Facebook was the main reason it actually developed much quicker after that one year of not even talking with each other. Two months later we started talking and another two years later we were married. The blog post Our Story: “How we Met” is all about how we got together in a more detailed version.

What are the big differences when it comes to living in Europe as opposed to China?

There are so many differences but they are mostly what you might expect such as the mentality of the people, the amount of people, how things are being done and of course the pollution. Back then we lived in Finland and it is so much different than China. The country isn’t big — only five million inhabitants — wonderful nature right at your doorstep and clean. Then Finland belongs to the countries with the lowest corruption rate in the world (though there is corruption, just done a bit different way than in China). In China the amount of people might be shocking for many people who are used to a half-secluded life. Everything is just noisy at first, kind of rough when you are used to waiting in line for the bus, not to speak even the whole thing about guanxi though this also exists in any other country just not so visible.

Do you have any advice for someone who might be marrying into a Chinese family?

Take your time. This is the only real advice I can give. Try to start things slowly and see how you can include their culture into your daily life. Sure there are differences depending on the family from very open to new things to very traditional. Because people are so different there can’t be any general advice on what to do, it is just learning by doing I guess.

15 thoughts on “Interview with Timo of CrazyChineseFamily.com”