Growing up with manga

Does the following count as anime/manga?

We all know the theme song.

There was a certain cartoon — a classic American cartoon of the 1980s that happened to be brought to you by Ronald Reagan’s toy advertisement deregulation. (So THAT’S why there were so many awesome 80s shows which were basically advertisements for toys.) A certain program we all grew up with, and it had Japanese origins.

In the early 80s Hasbro bought up several toy lines of transforming robots hailing from Japan. Marvel was hired to create the backstory, as the comic company had done with G.I. Joe. Jim Shooter and Dennis O’Neil created the Autobots vs. Decepticons of the planet Cybertron premise, with all the character profiles and so on.

The show was produced by Japan’s Toei Animation, and it was a hit. Transforming robots, what’s not to love! There was also Gobots that predated it a bit, from Tonka and Hanna-Barbera, and the less said about that.

To me, the highlight was 1986’s Transformers: The Movie, set in 2005, a brilliant piece of outer space escapism that killed off Optimus Prime and had all Cybertronians facing off against the planet Unicron. AWESOMENESS.

And I fucking hate the new Hollywood blockbuster movies. They are shit. I’m not even going to get into that. No, I am all about the Generation 1.

Going back to the post My History of Comics, when I was about 11 I moved into some relatives’ house and inherited a ton of 1980s Marvel Comics. I didn’t mention that many of those comics were the original Transformers. I had almost all the issues from # 1 to 55 written by Bob Budiansky, although there were gaps filled in later.

It was originally intended to be in the mainline Marvel Universe, and issue 3 featured Spider-Man vs. Megatron! That full issue to this day can’t be legally reprinted by other companies.

Actually, it was fascinating to me and much better than the TV series. Optimus Prime died early on, replaced by Grimlock. Prime did come back to life. Megatron died and came back too. The Headmasters spinoff featured more complications, and it built up to an epic mythology. Even a crossover with G.I. Joe.

It got even better after 56 as writer Simon Furman took over the franchise until the final issue 80. He said that at the time Hasbro was winding down the product line and he was given free reign. He incorporated much of the futuristic film’s characters, and told of the secret origin of the Transformers. Most of those issues are rare and valuable today; I didn’t read much until reprints in graphic novels years later.

I did however eat up the short-lived 12 issues of the Generation II written by Furman. It was pure 90s Marvel, violent, and I an adolescent just loved it.

Nowadays, it’s hard to recall that there was a time when the popularity of Transformers was uncertain. In the early 2000s, Pat Lee led a resurgence with high-quality art in the anime style, and Dreamwave was licensed to publish new Transformers comics.

Now a proper grownup, I geeked out as only a well-read adult can. I’m too old for toys. Most of the time. There more decorations than toys. Yet will not apologize for my taste in fine literature.

The first two miniseries were actually not that great, but then an ongoing series by Brad Mick got much better. I felt they were building up to the film’s 2005 year, and then they were going to get into Arcee and the female Autobots, when Dreamwave abruptly went bankrupt and the whole thing was stopped short at issue 10.

Simon Furman also wrote an amazing prequel set of series, The War Within, on the ancient beginnings of the Cybertronian civil war. The art and redesigns were meticulous. Two 6-issue miniseries, but then a third one cancelled in the middle. 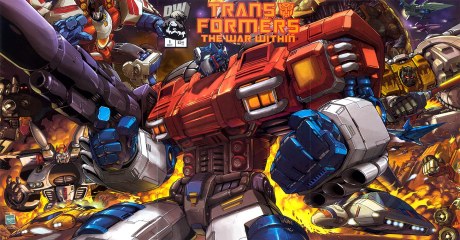 IDW took up the mantle and currently publishes many Transformers comics. I hear some of them are supposed to be good. Sadly, I got burnt out on reboots and moved abroad and don’t follow.

Then again, there was one IDW book I insisted on reading.

Firstly, note Larry Hama’s G.I. Joe: A Real American Hero. This is a comic that continues the continuity of the 80s/90s Marvel series, albeit now published by a different company. Dreamwave gave the same opportunity to Simon Furman to finally finish his Transformers masterpiece after all these years. The first issue started at “81”, and then concluded at 100. I purchased the first ten from America, then had some complications getting the rest, and at last ordered the final two graphic novel volumes in Hong Kong. It was a good read, not as good as Furman’s first run, but pretty fun. Hot Rod’s destiny and all that. They are not my bookshelf right now, the pic below was taken at home not stolen from a wiki site:

That is it for Transformers, one of the most cherished franchises of my youth!

All these corporate characters. Really, man. Whether American superheroes or Japanese warriors or American-Japanese robots, all are fun but ultimately big money shticks. Don’t I ever read anything more literary? More indie?

I do. Of course, though I make no apologizes, there’s a lot more to comics than these boy’s adventure stories. There are all kinds.

6 thoughts on “More than Meets the Eye: the Transformers blog”