I have six tattoos. It’s a hobby of mine, albeit it’s an expensive hobby that I don’t get to indulge in often enough.

Each one is meaningful to me. I put a lot of thought into them and I have no regrets.

For a while, I was doing one per year. Then I stopped for several years. In anticipation of my big travel plans coming up, I want to get some new ink! What to choose, what to choose…

Let’s discuss. But first, the background on my present state.

I got my first tattoo when I was 21. It was the Disinformation logo:

A little out of order, keep in mind

That’s Disinformation Press, the counter-cultural alternative media publishers. I was very into them at the time. Read all their books, such as EVERYTHING YOU KNOW IS WRONG and YOU ARE BEING LIED TO among others. See the website Disinfo.com, which is unfortunately not what it used to be. The logo is supposed to be red on white, but I was told black is better and I do think that works.

The only disappointing part was that people would always ask my why I tattooed the Napster logo. So annoying. Thankfully nobody says that anymore, because Napster is no longer a thing. These days, occasionally someone says it looks like a cat not a devil’s head, but I’m still for it.

Next, I got a simple Icthys, otherwise known as the Jesus Fish. Why would I get this, you ask? Well there’s more to this fish than you know. One theory I enjoyed purports that it is a map of three-dimensional holographic reality by superimposing two flat circles which are Gnostic meta-universes (perhaps Heaven and Hell). Thank Grant Morrison’s the Invisibles graphic comics series for that. However, that interesting theory doesn’t hold up to further research. In truth, historical records show that various ancient pre-Christian civilizations used this symbol as a female fertility symbol. Turn it sideways, clockwise. Get it? It’s the most graphic of female parts, right there!

I decided to keep going with that pattern, I wanted to cover my body with various occultic logos from all over. Next stop, that most meditative of endocrine system metaphors, the chakras.

You might think I regret it how it turned out, but I don’t. Yes I’ve been accused of having a tramp stamp.

Damn I was so thin back then

This was part of my plan to have all the chakras tattooed up my spine. But I started with the second one, the Swadhisthana, which can represent sexual energy. I choose to focus on this for the obvious symbolic reverence.

Then I continued up the spine with the Manipura chakra, which was important for the meditation exercises I used to be into. The Manipura represents the stage of acceptance of the physical world on the path towards higher states.

Biblio: I got all these basic chakra icons from the book I was studying back in the day, Chakra & Kundalini Workbook by John Mumford.

There are some complications with this spinal pattern idea of mine. I still need to go down and do the root chakra of Muladhara, which will be way low down my ass. Haven’t gotten around to it. And say if I were to keep going, would I make to to Anja — the third eye — and tattoo my forehead!? We just don’t know yet.

In any case, I stopped there. As for continuing, wait let me get to that later.

First, check this out. In what I think was one of my better ideas, I had the eight trigrams of 八卦 banded around my arm.

This is what I refer to:

Scroll up top to see the armband version.

Not the (clichéd) Yin and Yang, but those lines outiside. Y’know, like on the Korean flag. Often used for fortune-telling in the ancient Chinese mystical practice Taoism, the eight combinations of three marks and the 64 combinations of 6 marks each have leave a unique impression on the universe of any given moment. This is the I Ching, the Book of Changes.

Some give it an even deeper meaning, some say it is an ancient form of binary code. They are combinations, not of 1s and 0s but of solids and brokens. I used to be quite fascinated by the subject. Mainly it was the work of the brilliant psilocybine/DMT guru Terrence McKenna and his computer projections of harmonic resonance and novelty, incorporating the methods of I Ching into historical projections, a truly mindfucking concept I could not get enough of.

So, I got all these tattoos in Cincinnati and Long Beach. Oddly synchronous, I paused after getting the Chinese-centric tattoo and then I actually went to China (who knew it would work out that way, perhaps there are some powerful forces at work) and then it took me a while to get new ink once in China.

My first one here was this, letting a friend practice his equipment by drawing the eight-pointed Chaos Star of chaos magic upon my left tricep.

Ouch. Just kidding, don’t hurt that much. Why am I always asked that?

It was but an outline, to be filled in eventually. I took my time, no hurry. At a later date, I went to Shangxia Jiu market in GZ and had the Sacred Chao imprinted inside. Much meaning herein.

That is not what you think it is. It is the Sacred Chao, the symbol of Discordianism, a subversive kind of joke religion that purports to worship Eris the goddess of chaos. “God is a crazy woman,” as they say. There is a pentagon and golden apple of Kalypso in there, symbolizing the Rule of Fives and the story of mankind’s first noble act of rebellion against divine authority. (All as popularized by my favorite writer-philosopher, Robert Anton Wilson in his mega postmodernist Illuminatus! trilogy of novels.)

This one still needs work, I want to put some color in the star points outline. A lot of these still need work.

Lastly, I hope to get a new one soon. There’s still a big empty patch of skin on my back that could use some design. Hairy guy like me, I need to take any empty patches of skin that I can. And, while I’m still working for others for a living, can’t do crazy sleeve tattoos. The back it is.

I wish to finally continue the chakra theme…

That’s means the Anahata chakra, the heart chakra, the energies of the above and the below combining in the human center. In the shape of a hexagram, two triangles, the six-pointed star. But not in a jewy Star of David/Seal of Solomon kinda six-pointed star way.

Shall I go with this complex artscape 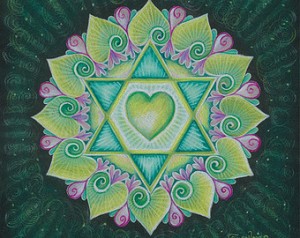 I will report back when I’ve made my permanent decision.

Whatever I choose, there will always be more work to be done. It could go on forever.

All art is never truly finished. You simply stop working on it one day.