There has been so much in the news lately to fret over, hasn’t there~

With the 100 days marker having come and gone, there’s been plenty of review over how horrible this current administration is.

Luckily, if you call that luck, it seems that the problem hasn’t turned out so much to be ruthless fascism but instead it’s simply that the president is a total idiot and his people are completely incompetent. What else to expect from such a lying con artist? So not much at all has been accomplished, other than the very low bar of not a government shutdown and that they narrowly approved a supreme court justice which should have been a sure thing anyway.

Overall, the main takeaway is that the whole world is in an anxious mess worrying about what madness is to come next. The point is, constant worrying is apparently the new normal. Try rejecting that normalization.

Hell, perhaps my analysis last month that America is without a President is correct and we can hold out for hope if we only wait patiently. There’s even the interpretation that this mess is in a partisan political sense, because the party with record-low approval ratings may have technically won but in the long term the other party is going to make gains next.

But you know what? Fuck that interpretation. Too much damage has already been done to the American character. It’s not worth it.

I for one am sick of the double-standard in which America’s default is to have idiotic leadership, and the rational leadership has to try that much harder. Just why is it that everything is Clinton’s fault (which she herself has to acknowledge) but the right can get away with anything? Is this truly how the system works, that the left has to be perfectly flawless and excite voter turnout and have a charismatic leader at all times, and anything less that that must result in America being like this? Seriously, it’s not enough to win by 3 million votes!

What a ridiculously broken system.

In fact, I am currently debating with myself whether my moral next step is is to figure out how give up American citizenship altogether or to register to vote in my home swing state of Ohio. That’s a lot of inner conflict.

Anyway, I do have a point to get at. I think that America is irreconcilable. The nation-state as a thing is probably over. The nationalist surges around the world are the death throws of a failed system, and whatever corporate dystopia that is to come may or may not be that bad but in any case don’t depend on the government to take care of the people. Whether one wants healthcare or bringing back factory jobs, it’s not going to work. And it raises the question if there is much reason to have such things as nation-states anymore.

The reason that the situation is irreconcilable, in America specifically, is mostly because of the stupidity and bigotry of the people. Yeah, that makes me an arrogant liberal or something to say that out loud. Now it’s bad political strategy to admit it, or whatever.

But come on. The latest extreme confirmation of this is the recent poll that shows 98% of those voters do not regret their vote. Doesn’t get much more dire for faith in humanity than that.

I can only conclude that it is useless to debate with these people. No matter what happens, no matter what executive orders fail or what petty tweets praise dictators, a major segment of the American population is literally in a cult of personality. And there’s nothing anyone can do about it. These people will declare any information they don’t like as fake news. They may not be the majority, but the pendulum swinging back and forth no longer matters. The whole system is a lost cause.

It’s interesting to note that the the latest bizarre statement controversy is about the Civil War, y’know those shockingly ignorant comments about Andrew Jackson. It makes one one wonder if it was a mistake to preserve the Union, and if the South should have been left alone to become a failed state without the support of the North. But then, that wouldn’t have been very good for the slaves, and slavery is the obvious historical reason for the Civil war no matter what neo-confederate racists think.

I just can’t even try to empathize with these people anymore. They are not my people. We have nothing in common. Maybe they should just have their own country and leave the rest of the world alone. Fine, try out your traditional values/theocratic form of government. While I do feel bad for the minorities who suffer under this, perhaps the best-case scenario is that they move somewhere better. Nowhere’s perfect, but truly some places are a lot worse.

And I honestly hope that the California secessionist movement takes off and the state becomes it’s own country. In that case, I would be proud to be a California citizen. Would definitely solve my personal quandary.

Anyway, this is old news from 2013 but I find it more pertinent that ever. Check out this theory from Colin Woodard about how the country should more accurately be referred to as 11 nations — including Canada and Mexico by the way. More a cultural North American thing, than that that outdated nation-state with borders thing.

This truly explains it so well. I may be a Midlander myself, but Yankees and Left Coasters for all their flaws are alright and can at least run a decent country and economy with a minimal decency of human rights. I blame those voters in the Far West and Deep South who have irrevocably ruined it all for western civilization.

And that there is all the sense I can make of it: 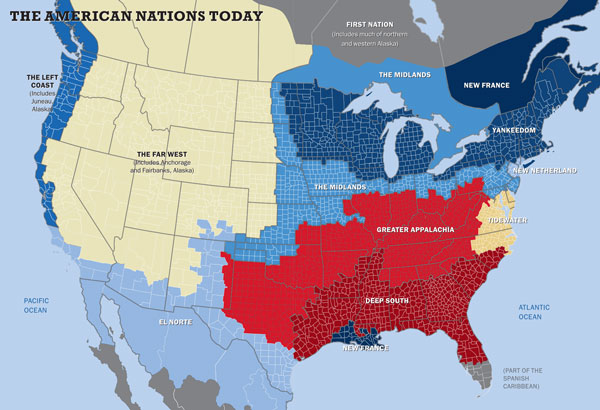 Yankeedom: Founded by Puritans, residents in Northeastern states and the industrial Midwest tend to be more comfortable with government regulation. They value education and the common good more than other regions.

New Netherland: The Netherlands was the most sophisticated society in the Western world when New York was founded, Woodard writes, so it’s no wonder that the region has been a hub of global commerce. It’s also the region most accepting of historically persecuted populations.

The Midlands: Stretching from Quaker territory west through Iowa and into more populated areas of the Midwest, the Midlands are “pluralistic and organized around the middle class.” Government intrusion is unwelcome, and ethnic and ideological purity isn’t a priority.

Tidewater: The coastal regions in the English colonies of Virginia, North Carolina, Maryland and Delaware tend to respect authority and value tradition. Once the most powerful American nation, it began to decline during Westward expansion.

El Norte: Southwest Texas and the border region is the oldest, and most linguistically different, nation in the Americas. Hard work and self-sufficiency are prized values.

The Left Coast: A hybrid, Woodard says, of Appalachian independence and Yankee utopianism loosely defined by the Pacific Ocean on one side and coastal mountain ranges like the Cascades and the Sierra Nevadas on the other. The independence and innovation required of early explorers continues to manifest in places like Silicon Valley and the tech companies around Seattle.

The Far West: The Great Plains and the Mountain West were built by industry, made necessary by harsh, sometimes inhospitable climates. Far Westerners are intensely libertarian and deeply distrustful of big institutions, whether they are railroads and monopolies or the federal government.

New France: Former French colonies in and around New Orleans and Quebec tend toward consensus and egalitarian, “among the most liberal on the continent, with unusually tolerant attitudes toward gays and people of all races and a ready acceptance of government involvement in the economy,” Woodard writes.

First Nation: The few First Nation peoples left — Native Americans who never gave up their land to white settlers — are mainly in the harshly Arctic north of Canada and Alaska. They have sovereignty over their lands, but their population is only around 300,000.

7 thoughts on “America is irreconcilable”